Vehicles containing more people than just the driver are a relative rarity on our highways. Some estimates place them at less than 10% of the total number of vehicles on the highway! In order to encourage the efficient movement of more people, High Occupancy Vehicle (HOV) lanes were created. There is an added benefit, filling up the vehicle means a "greener" journey as well. 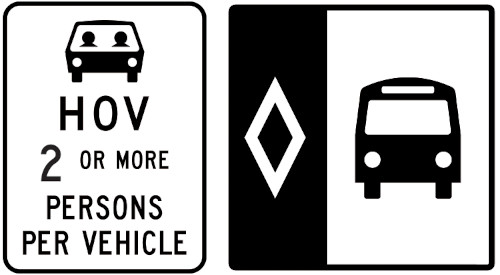 Don't confuse HOV and Bus lane signs. The sign on the left above is an example of an HOV lane sign while the sign to the right of it identifies a bus lane. HOVs do not qualify to use bus lanes.

Which Vehicles Do Qualify for HOV Lane Use?

In order to use an HOV lane, you must qualify as a high occupancy vehicle, which in BC is defined as a bus or any other type of vehicle under 5,500 kg GVW carrying the required number of persons as indicated by the sign controlling the HOV lane. If you and your vehicle fit the definition, you may find yourself travelling at speed in the HOV lane while others that do not qualify must crawl along in the other lanes.

Motorcycles are exempted from having to qualify according to the sign and may use HOV lanes unless specifically prohibited by posted signs. 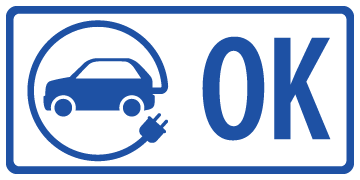 Electric vehicles that display an exemption decal are able to use HOV lanes as well, even if there is only one occupant.

Other exemptions include emergency vehicles, tow trucks responding to a breakdown or emergency, taxis (but not ride hailing vehicles) and cyclists.

Which Side of the Road?

In municipalities HOV lanes are on the right hand side of the street. On freeways they are on the left hand side.

You must enter and leave HOV lanes only when the line between lanes is a broken line. The solid line confines you to the lane otherwise.

You may also find signs directing you to make a wide right turn to avoid entering designated curb lanes.

I've been hearing that the blanket rule that, "Motorcycles are exempted from having to qualify according to the sign and may always use the HOV lane." is not always true.  Have you heard similar?  I'm told now that motorcycles can ONLY use the HOV lane if there is a posted sign that says "Motorcycles OK"

Motorcycles are Exempt by Law

Division 42 MVAR sets out an exemption for motorcycles in 42.02(3)(d). There is no sign required to be exempt, but if there is a sign there prohibiting it, then the motorcycle must not use an HOV lane.

You must enter and leave HOV lanes only when the line between lanes is a broken line. The solid line confines you to the lane otherwise, is easily the most misunderstood, ignored, and disregarded portion of the BC MVA. If everyone breaking this law for one day was ticketed, we might not need any other tax for the balance of the year.

Hi, Does the Electric Vehicles are allowed to drive in HOV lanes here at BC? In Ontario and California the EV are allowed, even the Hybrid vehicles. Cheers

If there was any traffic police on Highway 1 between Langley and North Vancouver they would have a field day ticketing people moving in and out of the HOV lanes and crossing solid white lines!  Drivers do it with impunity it seems.

Also nobody slows down, god forbids stops, when making a rh turn on red!

Dumbest idea in the history of the world, in my humble opinion, is for municipal HOV lanes to be in the congested right lane where every single car who wants to turn into a strip mall or service station must drive.

What idiot decided the right lane?

The rest of the world has their HOV lane on the farest left lane which makes the most sense.

Example. The right lane is solid traffic but because I am driving alone I must try to navigate into this congested slow moving right lane precisely at the correct time in order to turn into a mall. Big potential for a crash as a vehicle could be in my blind spot as they may have sped up to fill a gap. Crash. Whose fault is it?

If you have any connections in government please try to convince them to change their policy and revert to the rest of the world’s left HOV lane.

In my opinion and this is only my opinion, the curb side HOV lane procedures result in hazardous, frustrating driving conditions that create more problems than are solved.

How many law abiding drivers believe that the concept, although a possible option for some municipalities is not workable in Kelowna. There are too many drivers traveling in HOV Lanes that clearly shouldn’t be, so feeling frustrated and possibly angry, others join in assuming HOV Lane rules are not being adhered to. So an increasing number of drivers (as stated in the article) see it as a means of reaching their destination more quickly and at higher speeds.

Many drivers, especially seniors, are nervous attempting to move into the HOV Lane to make a right turn and primarily drive in the HOV Lane to avoid driving under stress. Some who try to access HOV Lanes are creating a hazard by not shoulder checking, relying on mirrors to avoid potential rear ending of the vehicle ahead and speeding up to move into what appears as an open HOV Lane opportunity.

Attempting a right turn onto Harvey is equally ominous and dangerous given high speeds and (more than a few) non-courteous drivers. The number of single driver vehicles flying by are clearly excessive to anyone observing. These comments are I believe, obvious and accepted by most drivers on HWY 97. The HOV Lanes are abused consistently, and are a source of frustration and stress to everyone behind the wheel of a vehicle.

If our roadways were less congested, drivers would possibly adhere to HOV Lane rules. Until the proper infrastructure and roads-ways are in place to accommodate our escalated traffic flow, the HOV Lane concept is unworkable, unenforceable, dangerous and should be scrapped.

Any vehicle traveling in the curb lane could possibly be subject to a reduced speed limit (including traffic camera enforcement) to allow for turning activity. This may not be an appropriate remedy - but maybe others do exist.

Are the city traffic specialists monitoring these HOV Lane issues and evaluating workability…. I’d be interested in their comments.