Theres another article in Burnaby Now about RCMP ticketing drivers that are skipping the two dedicated turn lanes and make a simple right turn at the intersection proper.

I'm curious as to what the drivers are being charged with? I don't see a no-right-turn sign above the intersection, yet the article states that making such a turn is "completely illegal". I can see how doing so is an unsportsmanlike selfish move, considering that drivers are skipping dozens of honestly queued up cars, but what actually makes this turn illegal and what do you think the cops are writing the tickets for? Line jumping?

You bring up an interesting subject.

And frankly, I find it encouraging to see the Burnaby RCMP focusing on intersection behaviour instead of speeding tickets!

I'm pretty certain that there's no 'Line Jumping' infraction to be found in the mighty Motor Vehicle Act, but let's see what else they could come up with.

First thing to realize is that the traffic engineers painted a solid white stripe that commences a long way prior to the intersection, to separate the two westbound lanes (continuing along Canada Way) from the two lanes heading right, into Kensington. And while some drivers planning on the maneuver may have deliberately stayed in the right lane that's supposed to continue on Canada Way, planning the late turn, many don't do this - they react to the stalled traffic ahead, and change lanes to the left too late in order to try and get around it. So these guys all deserve a ticket under Section 151(b) regardless of what they do when they get to the intersection.

(b) must not drive it from one lane to another if that action necessitates crossing a solid line,

When it comes to that rude right turn, I would expect that Section 165(1) could be applied.

This is where a point of law might be brought up, as in 'What is a Roadway?' and/or 'What is an Intersection?' as there could arguably be two intersections there, as created by that triangular island.

Another piece of legislation that might be useful, inasmuch as many of these drivers don't actually complete the right turn in one clean maneuver, would be found in Section 189(1)(c).

189 (1) Except when necessary to avoid conflict with traffic or to comply with the law or the directions of a peace officer or traffic control device, a person must not stop, stand or park a vehicle as follows:

(c) in an intersection, except as permitted by a sign;

Meanwhile, if I were the Burnaby RCMP Traffic Sergeant, by now I would have called the Burnaby Traffic Engineer and said something like this: "Lookit, you've got the two lanes headed for Kensington designated by three separate pairs of right-turn arrows - so could you get out the paintbrush and paint three separate pairs of straight-ahead arrows in the adjacent Canada Way westbound lanes? And while you're at it, why not put up a couple of Lane Use signs or Turn Control signs at the point where drivers are making this dumb manuever (you can hang 'em beside the traffic lights) indicating 'straight ahead' only?"

This would probably free up the cops so that they could issue tickets to all the drivers along there who follow too close, or switch lanes without signalling, or other illegal, collision-causing, road-rage inducing, behaviour. Hey, I can dream, can't I?

Not so "completely illegal"?

Barring the crossing of the white line, and not blocking the intersection, the act of turning right at the triangular island at Canada Way and Kensington seems to be perfectly lawful to me... until a right turn prohibited sign is installed (or a directional arrow allowing forward motion only is painted).

Resolution to the problem!

I was driving along Canada Way yesterday, and noticed that nice new Turn Control signs have been installed, specifying that drivers must 'Go Straight Only' at this junction (unless they're in the right-turn lanes).

The police can't be everywhere to monitor this stuff, so it's encouraging to see that the traffic engineers have come up with clearer regulatory direction.

Not resolved, rather provided a rationale for the charge

Yup, as mentioned by @CompetentDrivingBC, some (a) signage has been added to (kind of) explicitly make the maneuver illegal. 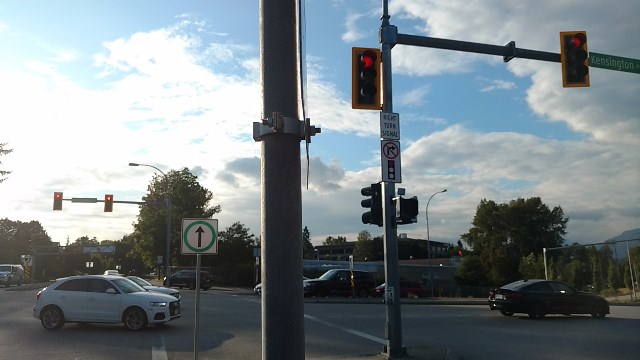 I would love to know if this was an outcome of someone taking this to court, challenging it and getting the ticket formally dismissed or did the officer simply withdraw the violation?

I'm sure  the discussions between the police officer and the traffic engineer over that one were interesting.

I wonder if the single sign placement meets the standards under the Manual of Standard Traffic Signs & Pavement Markings - 1.7 STANDARDIZATION OF PLACEMENT ?

In most circumstances where there is a restriction like this, you will find a sign on side of the roadway and  signage affixed to at least one location on the traffic signal post(s) on the far side of the road, as shown just a few hundred metres away at Deer Lake Parkway and Canada Way.  In this case, there are none (too much trouble to get a bucket truck?). Also why choose an R-17 NO TURNS (green circle), rather than the more explicit R-15R NO RIGHT TURN (red circle)?

Finally,I would submit that all the other violations issued there should also have proactively withdrawn (and penalties reversed), even for those who did not challenge the charge.

In any case, I fully agree the right angle movement should not be allowed but it must be properly signed. I previously complained to the Muni / Burnaby about issues with the lanes markings and overhead signage there. After saying it's the responsiblity of MOTI and the contractor and could not address it, Burnaby did in fact repaint the markings, but not re-align them as initially requested. Did MOTI/MAinroad or Muni / Burnaby erect that sign? The whole intersection needs a proper traffic analysis and safety review.

Here's a question that deserves an answer ...

Also why choose an R-17 NO TURNS (green circle), rather than the more explicit R-15R NO RIGHT TURN (red circle)?

Some Traffic Engineers are only too willing to put up signs and markings that effectively advise drivers what not to do. Don't do this! Don't do that! This action is prohibited! Etc. And so, often without thinking about it much, they will erect a black on white sign with a red circle and diagonal bar to make it clear what exactly drivers should not be doing. Uh huh.

But that doesn't mean that the best information has been provided. For instance, could a driver at this intersection turn left? Hell no, they'd end up on the sidewalk in front of the Shadbolt Centre!  So, if they can't turn left, and if they can't turn right, then what option remains? Oh yeah! - going straight without turning! Which exactly explains why the R-17 was the best sign to use here.

But you don't have to believe me; just read the words on Page 2.18 Regulatory Signs of the pdf you linked to:

The main consideration in selecting the appropriate turn control sign is to optimize driver intuition. The following are some general guidelines for selecting these signs:

* It is desirable to indicate to the motorist what they must do rather than what they cannot do.

Mandating that drivers proceed straight at that location was the exactly correct sign to employ, both beside the roadway and beside the signal head. Hope this helps!

Check out this Q&A that is already on the site.

This must be a pretty complicated issue.

Instead of using Twitter, I sent a message to the Burnaby Detachment media e-mail address and the author of the Burnaby Now article.

No answer from either of them.

Reminds me of that one time, in North Van, when an officer and their partner were hiding out in the bushes near the Sea-bus loop, and suddenly popped up beside me with a U-turn ticket in-hand for a lawful u-turn. I had to go to court and explain to the officer before the trial why the turn was legal. The officer agreed and withdrew the ticket.

But I have a feeling that I am not the only motorist that had received an erroneous ticket from the bush-dwelling duo that day, unless hiding in the bushes is a fun past-time for N.V. RCMP... In either case I doubt that they withdrew any of the other tickets they'd erroneously issued at that spot after my court appearance. Why bother?
They are tasked with upholding the law, and suprisingly enough, there isn't a law that requires them to fix their mistakes retroactively.

I don't suppose there exists a process for Police to bulk-renege on certain tickets that were issued erronously but still fully paid by the recipient that would refund the money and expunge the record of the offense? The only thing that comes to my mind is a class-action law suit, which from the perspective of a taxpayer suing the taxpayer funded enforcement arm is like gnawing on your own fist.

When did you 'reach out' (modern parlance, apparently) to these folks?

If neither the Burnaby RCMP nor Chris Campbell at 'Burnaby Now' can be bothered to respond, perhaps they should all go into a different line of work ...

Any chance of an update?

Surely by now the RCMP and the reporter have had sufficient time to respond?

If not, they have both failed Public Relations 101 ...

Actually, Yes, There Is

I heard back from the media liaison for Burnaby Detachment. The traffic unit is using section 151(e) MVA - Right Turn From Wrong Lane to ticket the drivers who turn in the intersection:

(e) when approaching an intersection intending to turn right must drive the vehicle in the lane nearest to the right hand side of the roadway,

Having sat and thought about this, it seems to me to be a valid charge. It also points to the need to update the Act as it fails to take into consideration that there are two lanes here meant to be used to make a right turn.

Pretty close to valid, but

I agree that the act needs to be updated to state that in-case there is a dedicated right turn lane (or two) provided the driver is not allowed to make a right turn outside of the designated turn lanes. Else city engineering could put up a no right turn sign / paint forward arrows.

Is the applicable charge here, I think:

Clearly the dedicated and painted right-turn only lanes and the dividing median are there to control traffic, so I think this charge fits best.  Let's not forget that anyone doing this isn't doing it from a lack of understanding, but from a desire to get around everyone else who has been patiently waiting their turn.

What traffic controls are there?

I can't recall whether the westbound Canada Way traffic is shown a pair of green arrows (pointing straight, in which case they would be required to obey them per Section 130) or a pair of solid green lights (which don't prohibit turning at all per Section 127).

Found it on Google Earth

Just answered my own question by driving along Canada Way on Google Earth - certainly as of June 2018, that pair of lights are regular solid greens (the Traffic Engineers should have used green arrows pointing ahead).

127 (1) When a green light alone is exhibited at an intersection by a traffic control signal,

(a) the driver of a vehicle facing the green light may cause the vehicle to proceed straight through the intersection, or to turn left or right, subject to a sign or signal prohibiting a left or right turn, or both, or designating the turning movement permitted,