COLWOOD - No Thought for Pedestrians

I found an interesting post on Twitter this morning by @renomate talking about the intersection of Ocean Boulevard and the Island Highway in Colwood. He said "Standing at the intersection, waiting for the little "walk" symbol to appear so we can cross... my (8 year old) daughter says to me, "Dad, what do you do if you want to cross there"? (pointing perpendicular to where we are crossing) "you have to cross 3 times, and there's not even a scramble" 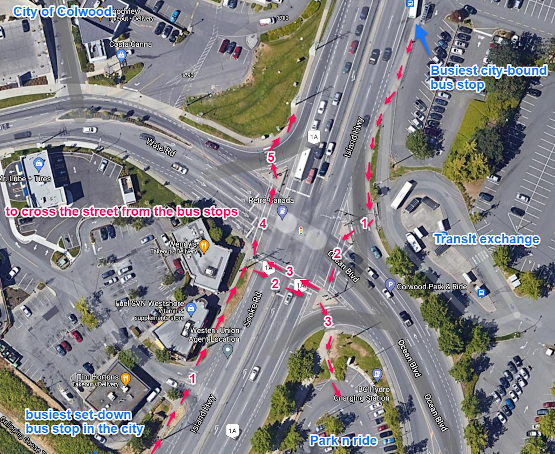 @renomate also included an image of this sign, although I cannot find it in Google Street View at the intersection: 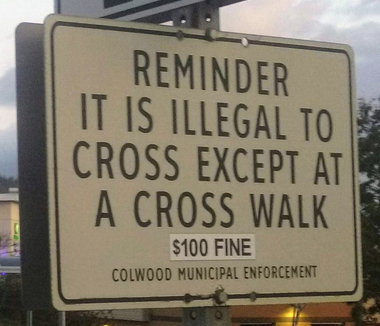 The inference that I take is that the side of the intersection without the marked crosswalk is not available for pedestrian use, even though this intersection is next to a main transit stop and shopping.

On page 322 of B.C.'s Active Transportation Design Guide we find the following:

According to the B.C. MVA, at the intersection of any two roads with pedestrian facilities, all legs of the intersection are legally considered to contain crosswalks, regardless of whether or not they are marked with signage or pavement markings. Unmarked crosswalks are typically defined by connecting the Pedestrian Through Zones on either side of the road. Where there is no sidewalk, the unmarked crosswalk is measured from the edge of the road.

The Guide goes on to explain treatments that would make this intersection friendlier and safer for pedestrians such as refuge islands, raised crosswalks and changes of curve radius.

While this intersection is clearly designed with moving motor vehicles in mind some changes can be made for relatively low cost, such as the refuge island, marking a crosswalk on all sides of the intersection and adjusting the traffic lights for leading pedestrian intervals.

A pedestrian scramble is not out of the question either.

There may well be room for improvement of pedestrians movements here, but seriously, how many 8-year old kids have ever even heard of a pedestrian scramble? I'll bet that many seasoned BC drivers reading this never heard of one, or saw one, either!

The scramble in Steveston works well. There may be other pedestrian scrambles around the province that I don't know about (anybody got any information on that?). Typically, they cease all vehicle movement for the time that it takes for multidinous pedestrians to get themselves, and their kids, across to the other side of the road(s).

But for pity's sake, the overview shows us that this is the conjunction of two multi-lane highways! Somebody needs to get a grip on what can be made to actually work, for all road users.

If ever a situation seemed to call for a pedestrian overpass, this looks like the solution to me. Painting crosswalk lines on the road doesn't make pedestrians safer (actually, that's where the majority of pedestrian deaths occur), but separating road user conflicts can be brilliant!

Doesn't subsection "O" of the Municipal Powers section of the MVA allow Municipalities to regulate pedestrian activity in unmarked crosswalks?

124 (1) The council of a municipality may, by bylaw not inconsistent with or derogatory to this Part, provide for the following:

(o) the prohibition of pedestrian traffic in an unmarked crosswalk designated by a traffic control device;