Entering an Intersection on a New Green Light

I watched the driver on either side of me this morning on my way to work. We were stopped waiting for a red light to turn green and I could see that both of them were totally focused on the that light. Neither one of them moved their heads and immediately started off when the light turned green. What a wonderful example of blind faith!

Why Not Looking is Dangerous

The two most likely sources of conflict for a driver facing a fresh green light are drivers who sped up on the yellow to beat the red light on the cross street and drivers who are turning left from the oncoming lanes. 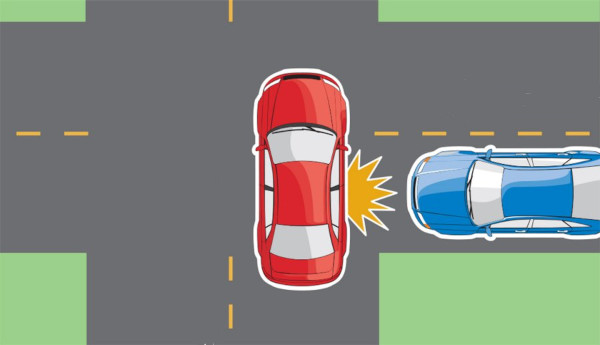 Drivers who speed up approaching a yellow light are choosing to increase the risk that they will run the light if they misjudge and it turns red. Drivers who proceed on the green without doing a 180 degree scan of the intersection first are inviting a broadside or "T-bone" collision. This type of collision is likely to result in severe injury for the passengers on the side of the vehicle that is struck.

What to do When Your Light Turns Green

The first thing to do is pause for an instant. Remember that you must yield to cross traffic that is still in the intersection.

Look left, look right and insure that cross traffic is coming to a stop. This is the 180 degree scan. Having done that, look left again and then move your foot from the brake to the accelerator if the way is clear. It never hurts to supplement faith with a bit of caution.

Do The Same at a Stale Green Light

This same practice of looking left and right should also take place before you enter an intersection where you have a stale green light. Similarly, if there are no traffic lights and cross traffic has a stop sign, look left, right, left again.

Don't Just Step on the Gas

Yes, cross traffic is supposed to come to a stop when our light changes to green. You can probably get by believing that they will until someone makes a mistake or wilfully disobeys the light. Blindly hitting the throttle as soon as the green is exhibited doesn't seem like such a good idea now, does it?

Good Practice for Pedestrians Too

Finally, you don't have to be a driver to exercise the left, right, left scan. A pedestrian stepping into a crosswalk would be wise to do this before leaving the curb. Many drivers don't like to stop before turning right on a red light and are probably looking left for cross traffic rather than looking right for you.

... we now have red light cameras at 140 intersections in BC, dishing out thousands of tickets (it's alarming, really, how many drivers run the red).

The actual risk of being hit by some vehicle driving against the red are higher than most people seem to realize.

I'm one of those that you would say charges off as soon as the light changes.

What I don't understand is why people sit there and don't pay attention to what the traffic is doing. The vehicles that have the green do get an amber light telling them the sign is going to change. If the first car has stopped there is a very good indication he is not suddenly going to accelerate and proceed through. While your checking out the first vehicle look at those following. If they are stopping you are probably safe. Then check the traffic on the right. If the same situation is there you should be safe when the green light comes on. Depending on the speed of the road you have between 3 and 6 seconds from the time the amber turn before it goes to red. You do have to pay attention to what the traffic on the green are doing yet there is always that period of grace. Vehicles don't magically stop when the light turns red. These drivers are no different than you and react to the amber. By time the light turns red they should be stopped. Another consideration is the people already in the intersection waiting for a break to turn left. If these vehicles are going to interfere with you starting off they have the right of way.

Now I don't know about the rest of you but I have what is called peripheral vision. So even though after I have checked the traffic both ways and turn my head back to looking forward I can still see the vehicles that are stopped. If they were to suddenly start moving I would notice.

When I am stopped at a traffic light and especially when I am the first vehicle and turning left you are always left with that uncertainty. Does the driver want me to turn in front of him, has he fallen asleep, or why is he sitting there?

What it comes down to is it is ridiculous for a vehicle to be sitting there doing nothing when the cross traffic has been stopped for a few seconds. Pay attention.

I'm Glad I Did

I was stopped at an intersection crossing Hwy. 1 in Salmon Arm a week ago. When the light turned green, even though I was the only one at the intersection, I hesitated a second or two before proceeding. Thank goodness I did because a car blew right through the red light and I would have been t-boned on the passenger door. Scary!!

Just because you can, doesn't mean you should.

At one time, in Driver Education classes, the advice was to count to three after the light turned green. But what if the driver on the cross-street (who may be messing with their phone, or having a medical emergency) zooms into you on the count of five ... eh?

What amazes me is how unthinkingly, drivers and/or pedestrians rely entirely on everybody else doing the 'right thing' all the time, despite the evidence all around that this isn't how many of them behave?

I've only been in one intersection crash in my life, one night back in 1975 in Winnipeg, when some drunk in a '66 Chevy came flying up a one-way street the wrong way and hit my Galaxie so hard on the right rear (I had floored the gas when I saw him in my peripheral vision) that my car actually spun twice on the way out of the intersection. To this day, I still need to see a chiropractor once in a while. And to this day, I even glance the wrong way when crossing one-way streets. Glad I hit the gas though, or me and the passenger probably wouldn't have survived.

And though I don't want to send this off topic, the people who scare me the most out there are young mothers, pushing their babies in prams, who cheerfully head across the crosswalk whilst engaged with their mobile phones, without ever a backward glance to ensure the safety of their child.

It's interesting how people behave, like they're conditioned to commands. But they would have a better chance of survival if they used their brains, and the eyes in their heads.

Maybe god is watching over you, or maybe it's Darwin, actually ...

As a former 1st responder. i preach ”1st in, 1st dead” when it comes to intersection safety. The other thing that continues to amaze me, while sitting at intersections, is how many people focus on the lane they're driving into, which is the safest, as traffic is moving away from you, and not on the other lanes, which, potentially are all lethal!