TranBC is introducing Automated Flagger Assistance Devices (AFAD) to B.C. Drivers. Apparently those drivers pay more attention to the AFAD than they do to a human traffic controller! In addition, if an AFAD is "killed" in a collision, it is simply replaced.

Even with advanced warning, it is often too dangerous today for a human flagger to stand on the roadway. The AFAD allows the human part of the system to position themselves safely while they operate it. 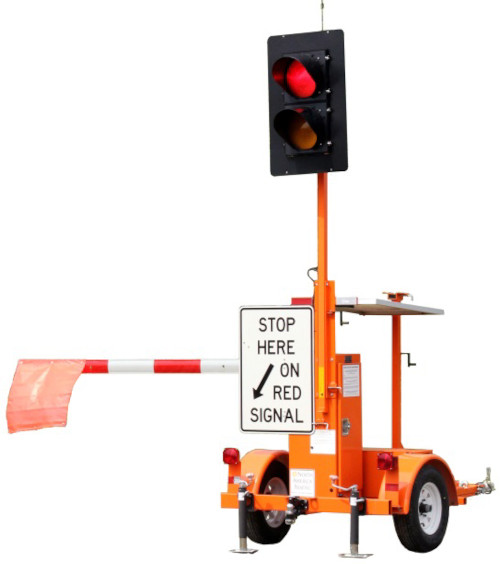 The AFAD has two phases:

Simple enough right? Not so according to TranBC. Some drivers don't know what to do and some simply choose to ignore it. This is not a good thing when the AFAD is controlling single lane traffic.

Operation may be done in multiple configurations:

Technical information on the use of AFADs is found in section 4.7.3 of the Traffic Management Manual for Work on Roadways.

I'm thinking here in terms of Section 129, and how it applies to mid-block pedestrian controlled traffic lights (after stopping, and allowing pedestrians to get to the other side, motorists may proceed, right?)

So it seems to me that this device can only 'command' drivers to stop at the stop line, but what is there in the MVA & Regs that commands them to remain stationary?

If it were me writing a ticket for disobeying this traffic control device I would write under section 125 MVA.

The barrier arm being down to deny access is the key, not the red light section of the MVA. That, along with the regulatory sign on display should be sufficient to convince the JP to convict.

Are you saying if one were to

Are you saying if one were to ignore the red light, that action is not enough to charge them disobeying a traffic control device?

The question was about using the red light section of the MVA to charge someone who failed to stop and stay stopped. As you are likely aware, if the red light is not at an intersection, one stops, yields as necessary and then proceeds, even if the signal is still red.

The AFAD's intent is to stay stopped until the flashing yellow is exhibited and that is why the barrier arm is there.

FYI, if there was no barrier - or sign directing you to remain in place waiting for a green - then this would be OK (except the driver of the blue car, who commits multiple offences).