Q: I ride a KLR 650, as well a KTM 450 exec. Both are street legal and have smaller engine displacements. These motorcycles are built with little steel and are mostly aluminum. Neither one of my bikes will force a light change at Leathead and 97 as well as Highway 97 and Sexsmith road intersections in Kelowna.

I see there are many states that actually make allowances with in the law for a motorcycle to proceed when safe to do so on a red but doesn't make it legal up here.

A: I contacted the Ministry of Transportation and Infrastructure for information on this situation. The advice was to stop your motorcycle over top of as much of the wire buried in the pavement as you are able to. This will mean positioning yourself over the left or right side of the loop rather than inside it or over the front or back.

An example of an inductive loop commonly found on our highways is shown below: 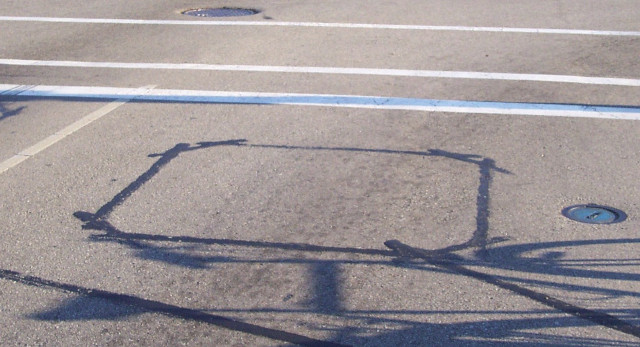 I was assured that if you did this, the traffic lights would cycle.

My next question was to ask what you do if this does not happen. There was a bit of hedging on this as the signal maintainers try to adjust the sensitivity of the loop to catch appropriate traffic but ignore drivers who don't maintain proper lane position as they drive through the intersection.

Ultimately, if the light refuses to cycle on a provincial highway or an arterial highway within a B.C. Municipality, you need to advise either the MOTI Electrical Services or the Electrical Contractor. Otherwise, you need to deal with the appropriate municipal department.

Finally, to deal with the situation where you have done everything right but the signal won't respond. The surest way to avoid legal issues is to turn right and then double back. You may not be able to convince enforcement personnel who watch you disobey the red light (with justification) that this is what happened and not issue a ticket.

There is no exemption to the red light law here in B.C.

Do you have a question that needs an answer? First, use seach to make sure it hasn't already been answered here. If it has not been answered, send me a request and I will create a Q & A for you.

Thanks for the tip (right or left of sensor circle) I was never advised of this technique. I always find myself going forward/backward trying to set it off, looking foolish as some drivers truly don't have a clue about sensors. Sometimes I get lucky and a vehicle will arrive at the opposite or behind me but most often I proceed on the red when it's safe to do so. I see that's a no, no too. It's VERY frustrating if it's a busy intersection. I guess I'll be more vigilant now that I understand there are no-exceptions to the rule.

Theres a device for that!

I'm not affiliated with the maker of this device, but through quick research I found that magnets don't do much with induction loop detectors. But what does work is active variance device that first measures the loop's default signal and then bursts out a difference signal.

Seems to have good reviews on eBay.

This is a common problem for cyclists as well. Unless the loops have the sensitivity turned up enough, a steel/aluminum bike is unlikely to trigger it, and a carbon-framed bike might as well be invisible.

Positioning on these loops is critical in getting them to trigger - here's a graphic that might help:

As for what to do if the light still doesn't trigger when I'm cycling, I wait a reasonable amount of time for the light, then invoke BCMVA 125.1 and proceed through the red light when it is safe to do so (then call the agency responsible and request they up the sensitivity).

125.1 (1) The driver of a vehicle approaching an intersection that has traffic control signals that are inoperative must stop before entering the intersection.

Thanks for the graphic, I had not thought to look for one.

I've contemplated your interpretation of section 125.1 MVA and while partially operative fits within the defiinition of inoperative according to the dictionary, this was not the intent of the legislation. It was enacted to prevent drivers from just sailing through an intersection when the traffic signals were out, creating a four way stop situation.

I did try to search case law for a reference to that section but was not able to come up with a decision.

My $0.02 is that given that the direction of travel is controlled by the detector, the failure of the detector to trigger on a valid road user constitutes "inoperative," as that road user is blocked from travelling in the direction. That may not be what section 125.1 was intended for, but consider the possibility that that section might have been written before detector loops were even in use in BC.

I can't imagine that a judge would convict a driver, motorcyclist, or any other valid road user if they demonstrated that they waited a sufficiently long time to come to the reasonable conclusion that the traffic signal was effectively inoperative before proceeding on a red light when safe to do so.

Sometimes I get lucky and a vehicle will arrive at the opposite or behind me but most often I proceed on the red when it's safe to do so.

I wait a reasonable amount of time for the light, then invoke BCMVA 125.1 and proceed through the red light when it is safe to do so

In the case of a motorcyclist, putting the bike on it's stand then walking over to the corresponding pedestrian push button would seem like a wiser choice, methinks.

In the case of a cyclist, walking your bicycle over to that pushbutton, and proceeding as a pedestrian would also achieve the goal.

For sure, there will be times (such as with dedicated Left Turn lights) when this isn't an option; but it's rare to see a cyclist or motorcyclist stuck in that position from what I've seen.

Cool diagram of best cycle placement over the magnetic sensors, though!

I regularly use the intersections noted in the original query, and they do indeed often take a bit of extra care in positioning to respond to motorcycles (I'm typically on anything from 250-500cc). All of the previous advice except just riding through, agreed. Given the volume of traffic on that corridor 24/7, it's a very, very rare day indeed when there's no other vehicle behind me that I can encourage to move onto the second sensor, which really does work.

Two items: 1. Route choice - this is an incredibly dangerous, high crash rate section of road, beginning at Sexsmith/97. I deviate left before Sexsmith, at a lower volume/lower crash rate intersection that also has a better trigger. And do remember the old Defensive Riding mantra: "Three rights make a left", which is a much safer approach. Optional routes may be a bit less direct, but better that than direct to hospital.

2. Sexsmith/97 trigger: that intersection is all new, and out of interest I tried it Sept 22. No response for the left turn arrow, had to get the vehicle behind to pull forward a bit. I'm thinking the new set-up needs some adjustment, so forwarding that info to Highways & City.

And just to say  - frustrating and depressing to see the amount of work and taxpayers' money that went into rebuilding that intersection without actually changing the configuration to a safer design. Collision rate will remain high, without a doubt.