There have been seven RCMP Provincial Traffic Units and IRSUs included so far, with approximately ten more scheduled for the implementation by March 31, 2020.

Officers are happy with the system that permits them to fill the ticket by scanning the driver's licence and choosing the offence(s) to fill in the blanks. A completed ticket is immediately transmitted to ICBC for processing and officers notes are stored as a PRIME-BC record.

The only hard copy of an eTicket is printed at the roadside and given to the driver, who can choose to pay it on line or dispute in the normal manner. 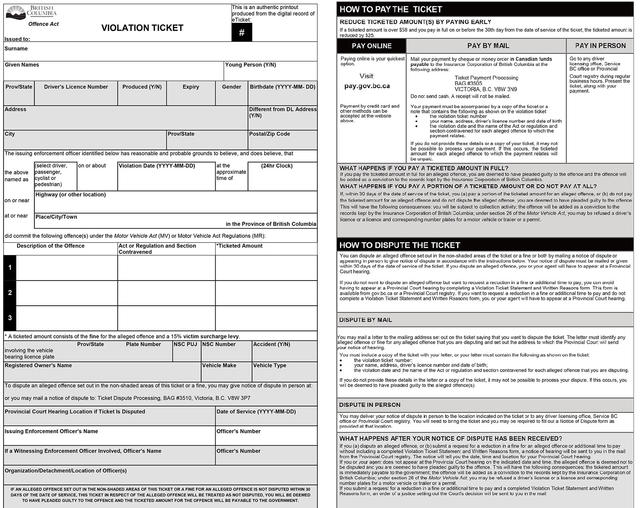 Currently eTickets are only being used for offences under the Motor Vehicle Act and Regulations. Other provincial offences are still being dealt with by traditional hand written tickets.

The future is now

This seems like a truly useful technology tool, both for accuracy and efficiency. Cops must spend a lot of time writing tickets by hand.

And at night, having those red and blue flashing lights in your mirror for ages can be really annoying. (That was a joke, eh?)

Why the paper copy?

Why print out a paper copy? It should be sent electronically to the persons E-Mail or cellphone. And all information the officer writes up should also be available to the person ticketed. And with modern technology the conversation between the officer and driver should be recorded and also forwarded.

This is one piece of equipment I have a feeling police may eventually hate. Something like cell phones videos recording interaction with people. If each officer has his own unit and if the E-Ticket machines are set up to keep track of offences ticketed, receive disposition of cases, it is going to be easy to request an officer to provide how many tickets he issued, for what, and what success rate they had in Court.

It will quickly show biases and if the Officer has a low conviction rate when contested. And if the officers information is readily available to those issued tickets more may actually contest.

I tell everyone to contest every ticket they get. You will seldom win in the Kangaroo Court more commonly called Traffic Court, but in these courts the rules of law are so badly bent you have a good reason to appeal. Once in a higher Court the ticket will be thrown out.

Once again I see the all too frequent assumption that everybody has a smart phone and / or a computer, or ready access to same.

Such is not the case with many seniors (perhaps other age groups as well) who are still driving, but choose not to have electronics ruling their lifestyle.

The hard copy printed at roadside needs to continue being available (just as tellers remain necessary at banks despite the companies wishing otherwise).

As I pointed out to a group of high schoolers it was our generation that invented the computer!

I currently put together our seniors newsletter. Out of the four of us one is 75, I'm 79 and the other two are in their 80's. I'm the only one with out an I-Pad. Pretty hard to find a senior today especially if they have grand kids that does not have some sort of electronic gadget and know how to use it.

So there is a need to be able to print a hard copy if necessary but as the younger generation tells us lets save our planet and quit printing paper copies unless absolutely necessary.

I manage web sites for two groups that tend to be on the older side. I continue to be amazed at how difficult it can be for some to simply log into the site in order to view private information. It occasionally takes me as much as 30 minutes to walk someone through a password change and login over the phone, so I understand where that comment is coming from.