Skip to main content Skip to search
Secondary menu
Home » How Heavy is Your Camper?

How Heavy is Your Camper?

One of my friends stopped to visit last weekend and showed me his truck and camper. You should write about this because people need to know how to be safe he said. He had switched from a one ton truck with single rear tires to one with dual rear tires. It made a big difference in stability and gave him a larger margin between the actual weight and the maximum weight allowed for the vehicle.

He had done his research because he knew that he had to weigh the fully loaded unit and then make sure that the weight on each axle and the total weight could not exceed the amounts shown on the vehicle's capacity decal. He also knew that there was a maximum weight shown on the sidewalls of his tires and that the axle weights must not exceed the tire capacities.

You can have your vehicle weighed free of charge at any government weigh scale, often at any time of the day, whether the scale is open or not. Simply position the front axle on the scale pad, record the weight, repeat for the rear axle and then add the two figures for the total. An RV dealer warned me once that camper manufacturers often under reported the unit's weight and all of the food, water, camping equipment and other supplies added more weight than people realize. Using a scale is the only way to be sure.

Vehicles that fail to obey weight rules will be ordered off of the highway by police or Commercial Vehicle Safety and Enforcement personnel. They must be unloaded sufficiently to comply before they may proceed again. There is also the possibility of fines in addition to the removal order. 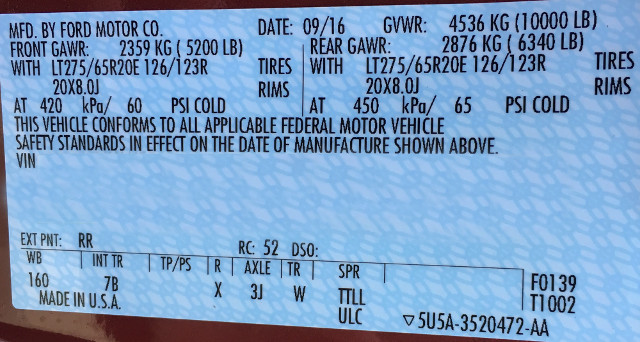 Thank you for your article on “how heavy is your camper”. I myself went through a lot of investigation as to the to the laws of exceeding the gross vehicle weight of a truck. I listen to sales people etc. saying things like just add air bags or increase the GVW through ICBC but in the end found the best or only way way to buy a truck capable of hauling the load. In my case it was a truck with dual tires. Not sure if you know this or not but when talking with officials at ICBC about exceeding your GVW . I was told that one could lose insurance coverage if that was a factor in a accident . So thanks for putting it out their for people to read about because when driving about you can still lots of over weight vehicles especially at the ferry terminals.

When speed limits were raised to the range of 75 -80 mph on high way 19 , I thought of the many RV's on this road during summer, I often travel at the old speed and am passed by trucks towing boats and all sorts of RV 's travelling at the speed limit, plus 10 KPH or 15 as is customary for many.

Personally I would not travel that fast towing a boat or trailer. Boat trailers immersed in salt water often have less than optimum brakes, unless stainless steel. Owning a boat with a trailer that needs constant attention to brakes- I'm aware of this issue. I have noticed that some have dispensed with brakes due to the maintenance issue. These Trailers are unsafe at any speed but going faster makes the potential outcome worse.

Some will say this is not an issiue-it has never  happened- neither did the runaway train in Lac Magontic, or the sinking of the Queen of the North

I keep on wondering why the Highways Minister raised speed limits when traffic was already allowed to travel at 128 KPH , 80 mph or so without police intervention. Intervention that is mostly absent on high way 19, which is the 6th deadliest in BC.