I live near a section of Highway 19 that travels through a built up area. The highway changes from 4 lanes divided by a barrier with a posted speed of 90 km/h to 4 lanes that is not divided posted at 60 km/h. So few people slow to 60 that I often hear long time locals asking new residents if they have gotten a speeding ticket there yet.

Before the median barrier was installed, this 60 km/h zone was part of the highest collision zone policed by Central Vancouver Island Traffic Services. 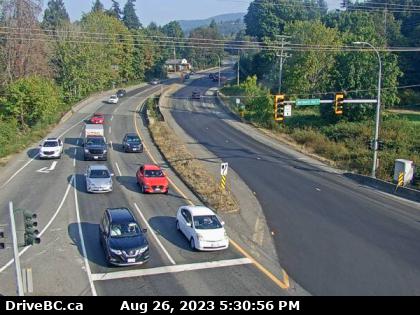 A couple of afternoons ago there was a two vehicle collision in that 60 zone that blocked northbound traffic. I posted details on Facebook in a local resident's group as there was no path around the collision scene and traffic would be held up until emergency services dealt with the situation.

The post triggered a discussion that included frustrated comments on how difficult it was to get onto the highway from side roads and that drivers regularly failed to stop for the traffic light in the middle of the zone.

Since this is a high collision area, it was also suggested that the appropriate authority be contacted to have a sign to that effect posted with the hope that drivers would slow down.

Which would you rather do when turning left from a stop sign, cross two lanes of traffic to enter a third lane when everyone is travelling at 60 km/h or at 90 km/h?

I've seen some novel ways to cope such as turning into the oncoming left turn lane and then moving right into the through lane.

The traffic lights at the intersection are preceeded by advance warning signs. One would think that if the drivers were paying attention red light running would not occur.

Having said that, I wonder if the advanced warning lights are timed for drivers who are obeying the speed limit. If they are, the lights will not come on soon enough to provide sufficient warning for those that remained at 90 km/h (or more).

The Ministry of Transportation and Infrastructure (MOTI) installed a dynamic speed display sign on the southbound side of the zone. It is unfortunate that the area is not covered by a traffic count station so that we can see if there has been an improvement or not.

About a decade ago I attended an open house hosted by the MOTI. They presented four plans for public comment on modifications to this stretch of highway so that drivers could travel through safely at 90 km/h instead of having to slow to 60 km/h. Aside from the installation of some median barriers, no other construction has taken place.

That decade has also seen the average annual daily traffic volume increase from 27,740 to 30,848 vehicles.

Of course, until the budget is found for changes, the simplest way to make this highway safer is for us all to share it unselfishly. If we slow to 60 km/h and stop properly for the red light chances are good that there will be fewer collisions like this one.

To me it is a nobrainer. Enforce the signage and speed limit. This is a good case for speed and red light cameras.

I've seen a few articles on the subject of "Sign Pollution".   This is one: https://www.dw.com/en/european-towns-remove-traffic-signs-to-make-streets-safer/a-2143663

We seem to have Municiple Governments who insist on yet another sign every time someone has a coming together, gets hit because they were jay-walking, a dog gets run over or whatever.  Where these streets and roads have been cleaned of all but "essential" signage, the result has been a reduction in collisions and other mis-haps.

Europe and several North American cities have proven that roundabouts are far more efficient at keeping traffic flowing than our traditional Stop & Go intersections. They are far cheaper to build than Signal Controlled intersections and have virtually no maintenance costs. In my experience, they do work better in Europe where "Courtesy" has not been so totally lost from drivers' vocabularies.

Lack of signage isn't the problem.

I know that piece of road, that intersection, and have driven through it many times in both directions.

What it needs is a major upgrade (including elimination of the traffic light controlled intersection) from the Provincial Highways people. But if the government don't realize this (and provide the funding) and ICBC turn a blind eye to all the collisions (rather than contributing some money) then guess what?

The situation will continue, and the crashes will keep on happening. But hey, if people wanna put up more signs, then go for it. Won't help much, though.