Municipalities around the province are constructing cycling infrastructure to provide dedicated space and in the case of separated bike lanes, enhanced safety. This has caused consternation for some drivers who are not sure how to deal with sharing the road.

A Kelowna resident observed that her community added bike lanes and almost immediately after there was a cyclist injured. She wanted to know how motorists should share the road with cyclists.

If the cycle & diamond symbol is not painted or the lane is not signed it is not a bicycle lane. The lane is often painted green to distinguish it from lanes intended for motor vehicles as well. Also, without the symbol or sign, the area to the right of the solid white "fog" line is the shoulder of the highway. 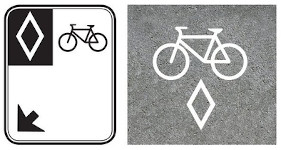 Is the bike lane treated as just another lane of traffic?

A bicycle lane is a designated use lane of the highway intended for use by cyclists only. Motor vehicle drivers cannot drive, stand or park in this lane. The exception to this rule occurs at intersections where a single broken white line exists. Drivers must yield to cyclists and then move to the right over the broken line to prepare for a turn.

When you are turning into a driveway or onto a road to the right and you have to cross a bike lane and there is a cyclist there, does the cyclist have the right away?

The answer to this is yes, the cyclist does have the right of way and drivers must yield it prior to turning across a bicycle lane.

Turns at intersections must be made into the first available lane. The bicycle lane is not available on a right turn unless you are a cyclist, so motorists must travel a little further into the intersection before turning.

The Manual of Standard Traffic Signs and Pavement Markings for British Columbia contains a warning sign for this situation instructing that right turns must be made wider than normally.

Passing on the right is another consideration. Many drivers think nothing of passing a overtaken vehicle turning left but they cannot do this if it means traveling over the solid white line or off of the roadway. The rule is supposed to protect cyclists in the bicycle lane, which is not part of the roadway, but a wise cyclist would never count on proper driving behaviour.

Lastly, we need to examine the case where a motorist needs to turn into or leave a driveway or alley. You are permitted to cross over a designated lane in order to park or leave the highway. Just signal, shoulder check and enter if it is safe to do so, yielding to cyclists in the bicycle lane. If you are leaving the driveway or alley, you must yield the right of way to cyclists approaching closely enough to be a hazard.

... seemed like as good a place as any to get information on something I noticed recently, on 3 Road in Richmond near Lansdowne Centre.

This is in relation to those signs and road markings that I think of as 'HOV Lane'. And the familiar symbol is that white vertical diamond shape on the sign or road surface. So, take a look here. Clearly, there's a well marked bicycle lane adjacent to the two lanes for vehicles, and the sidewalk. But if you scroll back and forth on that street view, you'll see both road markings and signage that uses the HOV symbol.

Is it possible that the white diamond has various interpretations, beyond the normal HOV Lane Rules?

Or does Richmond need to hire a new Traffic Engineer? Because I'm just not seeing any buses sharing that there lane with any cyclists ...

The diamond indicates a restricted lane. The sign that goes with it, in this case showing a bicycle, indicates that it is a reserved lane for bicycle use.

But where is the law on this, both in terms of easily accessible info (like an ICBC Driving Guide) or the MVA & Regs?

So far as I recall, most bicycle lanes don't use that symbol.

When a driver post a question that ends with "... does the cyclist have the right of way?" that can often be translated into "If I hit a cyclist in this situation, will I be at fault?"

My response to the question "Can you address how to handle bike lanes as a motorist?" would be:

1) Right of way is given, not taken.You always have the option of yielding right of way.

2) Regardless of right-of-way laws, etc., you should do whatever possible to avoid hitting a cyclist with your motor vehicle.

Frankly, I don't think you're entitled to make that judgment.

When it comes to this question, there's generally a tendency to ask 'do I have' or 'who has' the right of way, although it's not the best way to word things. Typically, as you say, it's something to be given rather than taken; and so far as I recall, BC Traffic Law will be worded not in a way that grants right-of-way, but rather who should be giving it.

It's entirely reasonable for any driver - or other road user (and that includes pedestrians and cyclists, you know) - to ask about this, in order to know how they should best proceed. In fact it would be a real good thing if all road users educated themselves as to their responsibilities.

I note that this thread was initiated twelve years ago, in response to new cycle lanes having been painted in a community. And thanks to this website, there's a chance for people to learn what the rules are.

But I don't think anybody is asking if it's alright to hit cyclists - that's in your head.

Steve Wallace, a well qualified driving instructor has this to say about cycling today.

It’s worth pointing out that although the cyclist must travel as close to the right as is practicable on the highway , they are not relegated to use the diamond designated use lane just as a motor vehicle can use other lanes not specially designated for their use. However, a cyclist must abide by the regular rules of the road when not in a designated use lane. This is particularly true when the designated bike lane is a protected and segregated lane. It is up to the cyclist to determine if it’s use is useful or warranted.

This is too often misunderstood by motorists who when observing a designated bike lane falsely believe that a cyclist must use that lane.

The relative issue with signage is that while a diamond is regulatory a bike symbol is not. This is often the failing of the municipality to not properly maintain regulatory symbols on the bike lane.

I am getting a little annoyed at the attitude of some cyclists here in Nanaimo BC. Cyclists must obey the rules of the road just like drivers of moving vehicles.

One day I stopped at Harewood Rd to make a right turn onto 5th Street to proceed east. Low and behold a cyclist blew through a stop sign going east on 5th crossing Harewood Rd. I made my turn onto 5th and followed the cyclist down to Bruce and 5th St. where there is a 4 way stop. The cyclist barrelled right through that stop sign as well almost broadsiding a vehicle crossing 5th St. proceeding south on Bruce St. The guy was lucky that day. This has to stop, or some cyclists will not see the next light of day.

Now, regarding bicycle lanes. When I pass a cyclists on a street with or without a bicycle lane and have to make a right turn, and I know the cyclist is well behind me, I move to the very right of the street with signal on , bike lane or not, to bloody well make sure he doesn’t come up along side me as I turn right.

I rode bike many years ago and was a Telegraph messenger with Cdn Pacific and we had to be responsible for our own safety. Today’s cyclist just do not give a damn and figure they own the road. I’ve had a couple previous encounters with cyclists before and I am very leary of them and pay special attention to them when driving around them.

Many municipalities and cities here in BC are now laying out bicycle lanes at a huge cost to taxpayers and it is about time municipalities and cities start charging a cyclist fee to help pay for this new infrastructure of bike lanes. This could easily be set up. You would register your bicycle’s serial number, a description, (like color and type of bike) plus a photo and a fee of somewhere between $25 to $50. On payment you would get a certificate to show ownership, a booklet on the rules of cycling and a small license plate to mount on your bike.

Kids up to driver’s license age get a cheaper rate to be paid by parents. This would also (I believe) cut down on bicycle theft.

If you are caught without a bicycle license you are given say 72 hours to get one. This policing could be done by Municipal by-law officers so as not to put more burden on RCMP and City police, although they could also enforce the rule.

A solid (not dashed) explanation of the "painted bike lane" rules that are most oft misunderstood or contravened. Thank you. Particularly helpful is the reference to the 2019  Active Transportation Design Guide. If you have a spare day and a half you must read it. I make light of the guide's verbosity but it points to a worrysome reality. There are so many types of bike lanes and signage standards the motorist cannot help but be perplexed. This is not condusive to road safety.

It does; however, make distinctions that we should all be aware of. "Bike lanes" are not the same creature as "Protected Bike Lanes" and certainly not in the same genus as "Multi Use Pathways" nor "Seperated Pathways". Got that? So when I hear someone say they are in favour of or against "bike lanes" I ask them to make the distinction only to find that they are invariably in favour of one type but leary of another.

Hiding within this velospeak is the ogre known as the "Parking Adjacent Bike Lane'. In other words the bike lane that demarks the "door zone" a euphanism for the deathtrap of an area beside a row of parked vehicles. If you are motoring beside this monstrosity expect cyclists to "take the lane" and not stay within the confines of the "painted bike lane" as a means of self preservation.